Introduction of ReSPECT to Lincolnshire

To all clinical staff in Lincolnshire

Introduction of ReSPECT to Lincolnshire

In 2014, a systematic review of Do Not Attempt Cardiopulmonary Resuscitation (DNACPR) decisions and documents was presented at the Royal Society of Medicine. It found that an approach that focuses only on withholding CPR in people who are dying or for whom CPR would offer no overall benefit has resulted in misunderstandings, poor or absent communication and poor or absent documentation. It was decided there was a need to improve patient and family involvement in decision-making, to consider CPR decisions in the context of broader care and treatment, and to record the outcome on a form that would be used and recognised across the UK. A working group was convened to develop a new approach, and ReSPECT was the result.

Following discussion at the Lincolnshire Palliative and End of Life Expert Reference Group, a recommendation was made to commissioners that we should look to adopt ReSPECT across all healthcare organisations in Lincolnshire.

ReSPECT stands for Recommended Summary Plan for Emergency Care and Treatment. The ReSPECT process creates a summary of personalised recommendations for a person’s clinical care in a future emergency in which they do not have capacity to make or express choices. Such emergencies may include death or cardiac arrest, but are not limited to those events. The process is intended to respect both patient preferences and clinical judgement. The agreed realistic clinical recommendations that are recorded include a recommendation on whether or not CPR should be attempted if the person’s heart and breathing stop.

How does it work?

The plan is created through conversations between a person and one or more of the health professionals who are involved with their care.

The plan should stay with the person and be available immediately to health and care professionals faced with making immediate decisions in an emergency in which the person themselves has lost capacity to participate in making those decisions.

ReSPECT may be used across a range of health and care settings, including the person’s own home, an ambulance, a care home, a hospice or a hospital. Professionals such as ambulance crews, out-of-hours doctors, care home staff and hospital staff will be better able to make immediate decisions about a person’s emergency care and treatment if they have prompt access to agreed clinical recommendations on a ReSPECT form. 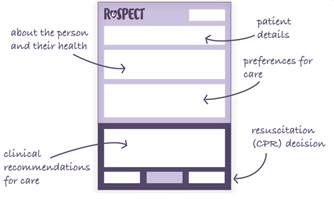 What is a ReSPECT conversation?

A ReSPECT conversation follows the ReSPECT process by:

It is anticipated ReSPECT will be implemented early in 2019. The ReSPECT form will start to be used instead of the current county-wide DNACPR form, and will work alongside existing Advance Decisions to Refuse Treatment (ADRT) and Advance Care Planning (ACP) forms. There will be a period of overlap, where existing DNACPR forms will still be considered valid, but new decisions should follow the ReSPECT process and be documented on the new form. ReSPECT forms will be printed centrally in the same way as the current DNACPR form.

ReSPECT is aimed at patients of all ages, whereas our current DNACPR form is only for those over 16. Our paediatric colleagues already use a detailed Personal Resuscitation Plan (PRP) for their patients. They have agreed to adopt ReSPECT, which will sit alongside the PRP and provide a summary of the emergency treatment plans it contains.

Further information can be found at the website: https://www.respectprocess.org.uk/ . This site includes resources, a list of frequently asked questions, and a learning web-app which can be downloaded. This contains information modules, clinical scenarios and quizzes. Please look at the website and app in order to familiarise yourself with ReSPECT.

GPs frequently see patients who are aged under 18 years of age without the parents being present. If the GP decides to treat these...

The Lincolnshire LMC is actively working with CCGs, NHS England, EMAS, Public Health & many other organisations regarding COVID-19. We...

Patients presenting with possible dental problems This guidance informs GPs of their obligations to patients either requesting...

Since the advent of The Data Protection Act 2018 and GDPR the LMC has received a number of queries regarding access to medical records...

Visiting patients at home is a part of the GMS contract. The GMS contract states; 7.6.1 In the case of a patient whose medical...

ADHD service for patients aged 16 and over

GPC England has been made aware that a number of local commissioners have refused locum reimbursement following GP partners returning to...

The Lincolnshire LMC run short educational webinars aimed at GPs and other practice staff who find it a challenge to take time away...